Here’s an excerpt from LORD’S FALL, just for fun. Hope you enjoy!

Since he knew Pia’s true Name, bringing her into a dream was easy. Still, he took time with this one and worked to get the details right, brushing them into place with his mind like an artist putting the finishing touches on a painting. Then he cast it out, an invisible net woven with Power, and he went to sleep himself and waited.

Part of him marked the passing of time even as he drifted quietly. Then he felt her presence slide into the dream, and he came alert.

The setting was cool and quiet, and a light, delicate wind blew. He had recreated the subtle hues of night.

She was outside. The light, musical tinkle of bells danced through the air. “What the . . .” she said, sounding disoriented and puzzled. Then she laughed, and the sound was more beautiful than the bells.

He smiled, rose from the couch where he had been reclining and lifted the flap of the tent to look out.

Sand dunes rippled underneath the silvery cascade of moonlight. Several feet away from the tent a small oasis of water, little more than the size of a comfortably large hot tub, was surrounded by a collection of ferns and palm trees, which didn’t make any ecological sense, but still, the scene was pretty.

Pia stood on the path between the tent and the oasis, looking down at herself. Pleasure washed through Dragos. She was a symphony of the precious colors he loved the most, silver, ivory and gold, and those gorgeous sapphire eyes. Her loose hair rippled down her back, and the harem outfit he had devised for her to wear was skimpy in all the right places. Bracelets and anklets of tiny bells adorned her graceful wrists and ankles, and her slender, arched feet were bare.

“What?” he said, strolling toward her with a slight smile. He was barefoot as well. He wore a simple linen robe that wrapped and belted at the waist, with thin cotton pants underneath. “The belly dancer outfit was my favorite part.”

“How very sheikh-ish you look.” Her face tilted up as he neared, and her midnight-colored eyes were wide.

The bells at her wrist tinkled as she raised a hand and laid it at his chest where the robe parted. Her fingertips were cool on his bare skin, her hand unsteady, resting against him as light as a trembling butterfly. “It’s at times like this that I want to say something incredibly foolish,” she said. She sounded breathless.

He captured her fingers and brought them up to his lips. “Like what?”

She murmured, “Like I’ll wear anything you want me to, whenever you want.”

“I see nothing at all wrong with that statement.” He mouthed the words against her fingers.

She snickered. “Of course you don’t. And I’m not saying it. I’m only confessing to the impulse.”

He told her, “You should always tell me your foolish impulses so that I may take advantage of them.”

“That is not going to happen, your majesty,” she informed him. “The ones I do tell you are bad enough.” She looked down at herself and her voice grew mournful. “This outfit makes me look fat, doesn’t it?”

“You’ve got to be kidding me,” he growled. He had started to bend down to her for a kiss, and he reared his head back to glare at her. Without a clever layering of clothing to hide it, her slender waist flowed gracefully out to a lightly rounded belly, and her breasts were lush and ripe, the creamy skin soft as a white peach. Everything inside him tightened at the sight. “You look utterly incredible.”

She swayed forward. He put an arm around her as she leaned against him, and his head came down over hers. He rested his cheek in her thick, soft hair, and for the first time that day the dragon’s constant, rogue urge to violence subsided. What it left behind was a deep, hungering ache. He wanted to drag her to the ground and ease his cock inside of her while she gripped him with her inner muscles and rocked him with her strong, supple body until he spilled everything he had into her. He was the hardiest of all creatures, but good gods, these dreams were going to kill him. 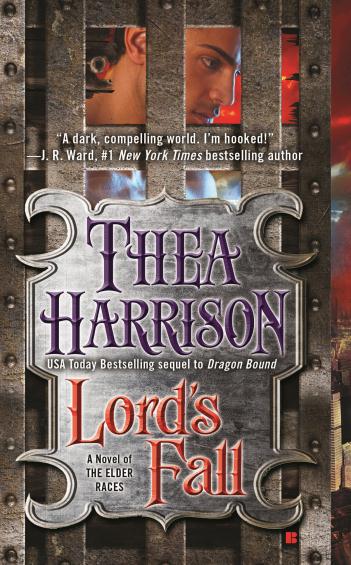