From Thea:  I’m excited to have my friend and NYT Bestselling author, the lovely and talented Vivian Arend back on my blog this week….

and she has a big treat in store for you!  Not only is the cover art for HIGH RISK absolutely fantastic, but so is the excerpt below.  Be sure to pay attention to contest details at the end of the post!

My writing career began in paranormal romance, slid sideways a little to include contemporary, and now? I’m very excited to be branching out into something new again. My upcoming release is a Berkley Sensation—and while it’s labeled Romantic Suspense, I like to call it High Adventure.

Take a peek at HIGH RISK, the first book in the Adrenaline series, coming March 5. 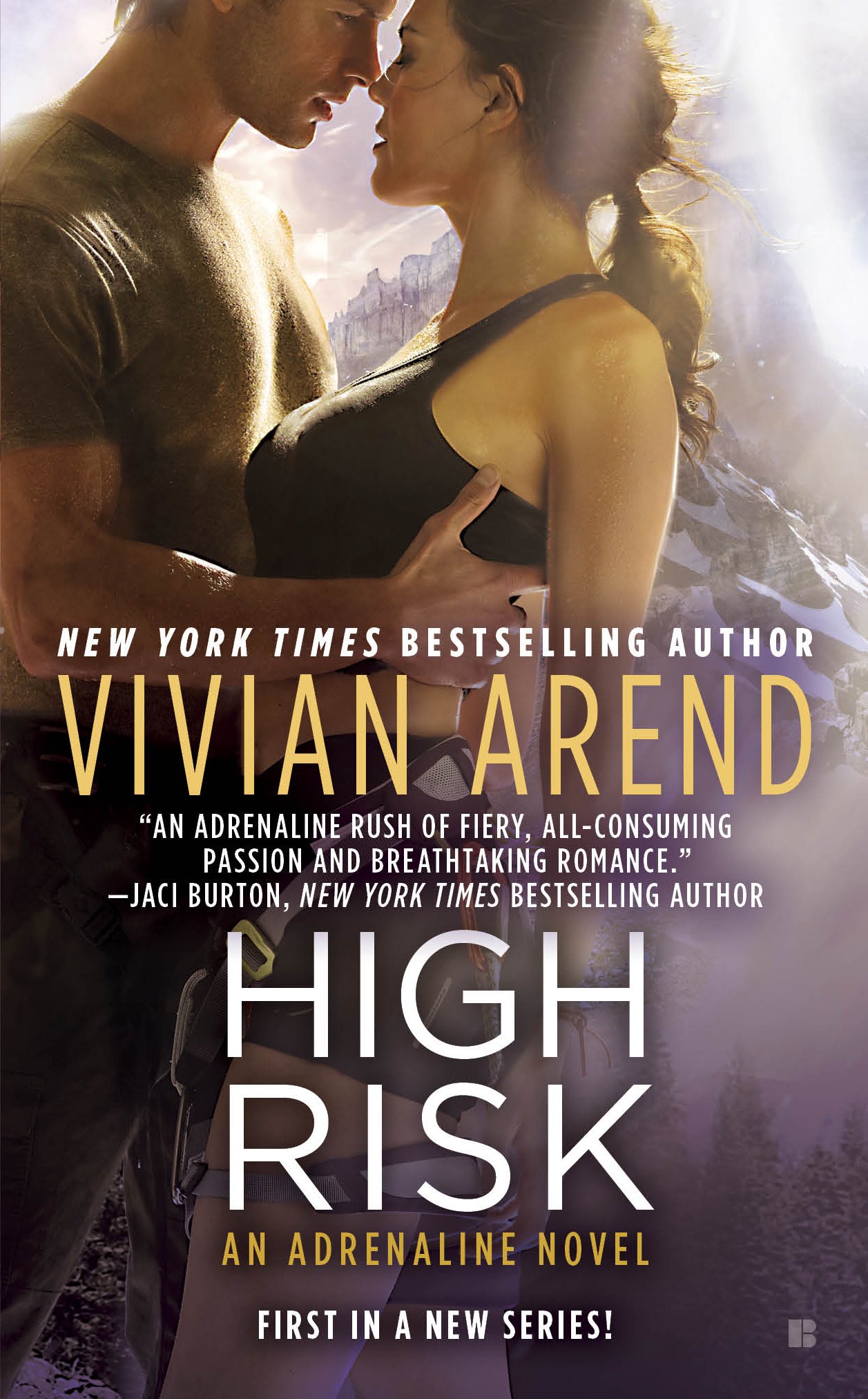 LIFELINE: an elite search-and-rescue squad based out of Banff, Alberta. Specializing in high-risk rescue missions, this team goes wherever the job takes them…

Rebecca James was once revered for her devil-may-care attitude and backcountry survival skills. But ever since she lost her partner in a fatal accident, patches of her memory have been missing. And until she can recall those final, tragic moments before the accident, she can’t move on.

Since Marcus Landers was permanently injured during a mission, all his energies have been focused on his Lifeline team. When Becki—whom he had an intense affair with seven years ago—arrives in Banff, he’s inspired to reignite the spark they once had. Their mutual ardor slowly awakens Becki’s dormant, haunting memories.

New truths surface until Becki must at last confront her greatest fear. Remembering the past might mean a future without the man she loves…

Enjoy an excerpt from HIGH RISK:

Becki undid the climbing belt connections, letting the heavy harness fall to the floor with a sudden crash. “No. No, and no. Damn you, Marcus, you’re turning this into another training session, and I was supposed to be all grown up and doing the teaching this time.”

“Can I help it if you forgot a few of the lessons I taught you? I’m offering a refresher.”

He shouldn’t have taken it there. Not now, not when she was still freshly terrified. But hell if he was going to let her run away. Or even walk—this was too important.

Something about seeing her freeze had changed everything. It was no longer just sexual interest he felt, the lingering desire to get physical. Her panic had triggered an emotion he hadn’t experienced in what seemed to be forever.

The need to get emotionally involved—to make a difference. This time on a personal level, not something worthwhile but generic like the distraction of his rescue squad.

It was as if embers had been stirred under him, cracking the icy core inside him. The desire to focus on something other than the misery he spent so much energy hiding from the team. His personal ghosts had haunted him for far too long, and by now he never expected them to go away. He’d accepted his occasional nightmares as unavoidable, but allowing her to suffer if there was any way to help was unacceptable.

Making sure that Becki didn’t have to deal with unanswered questions for the next four years of her life—it was a good goal to which to turn his considerable attention. If he had to smack her with the one common denominator they’d had all those years ago—sex—he’d damn well take advantage of it.

Her expression changed from indignation to passion before she snapped a lid on her control.

Marcus didn’t let up. “Together we’ll train the team. Outside of that time, you will train me and help me figure out how to use this arm as well as I used to. In exchange, I will train you, and we’ll get to the bottom of whatever the hell happened to you.”

“What if it never comes? What if everything stays a mystery?” she demanded.

“Then we concentrate on getting you back to climbing.” He broke eye contact, focusing instead on freeing his own rope. “The mind is a curious thing, Becki. Maybe you won’t ever know exactly what happened during the accident. Doesn’t mean you can’t learn to climb and not have to worry about freezing.”

She blew out a long, unsteady breath. “So that’s what happened?”

“Yeah.” He was finally loose, straightening the rope and allowing it to fall smoothly into place against the wall. “Wait. That’s another thing on the list.”

He glanced up, pleased to see she was smiling a little. “There’s always a list with me.”

Oh yeah. Her eyes heated. “What did I miss this time?”

“You will not apologize if—and that’s if, not when—you need to be saved again.”

She snorted, then gathered her things. “Why do I feel as if I signed up for something way worse than what you put your team through? And by the way, even if you’re not a sadist, you’re a mean son of a bitch. You called them out of bed after taking them for wings and drinks last night?”

“Also made them do repeats while we had breakfast. Don’t forget that part.”

An aura of sadness and fear still clung to her, but she seemed far more willing to keep moving forward with him than a few minutes before. Becki lifted her gym bag straps over her shoulder, settling the bag against her hip. She glanced around at the gym and shook her head. “Never thought this place would end up breaking me.”

She raised a brow and nodded curtly. “I am. I will.”

The determined line of her jaw said it louder than her words.