Can you believe it?  It’s already time to post the third excerpt of RISING DARKNESS!  The last few months have flown by!

The following excerpt is a snippet of when the hero and heroine, Michael and Mary, meet up for the first time in the book.  When they connect, they have a lot to deal with, including complex and even contradictory feelings for each other.

This is the last excerpt before RISING DARKNESS releases on April 2nd, and I’ve decided to hold a special contest for it.  The details, along with information on a Goodreads contest, are below the excerpt. 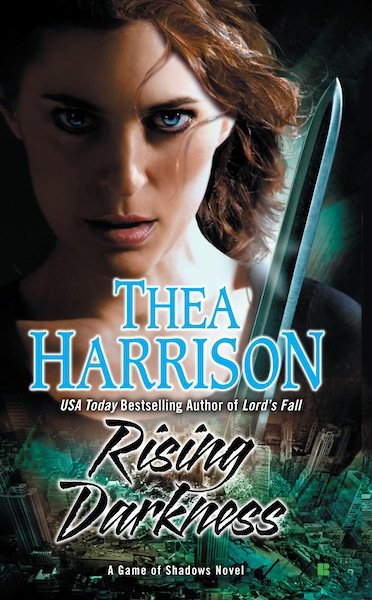 A bloodred petal in twilight.

She felt as empty and dry as a drained chalice. An abundant golden river flowed into her. Her parched soul soaked up the current. It was as strong and rich as burgundy wine, and as warm and nourishing as summer.

She surfaced from the black pit and became aware, as if from a great distance, of details around her. She was no longer hallucinating an out-of-body experience. Instead, she lay on the cold gravel between her Toyota and another parked car. Her body felt heavy and weak on the sharp rocks.

The unfamiliar car’s headlights threw a slant of harsh illumination on the scene. A pack of wolves ringed the area. Someone knelt over her, dark head and broad shoulders silhouetted against the angled light. Large, heavy hands rested flat on her torso, one at her sternum and the other on her abdomen.

The car headlights seemed thin and white, and as dim as shadows, compared to the man who shone from within like the sun.

The golden river poured into her.

A powerful sense of recognition flooded her, along with an incandescent joy. She took a breath and sighed, an easy expanding movement, for the moment free from fear and pain. Moving one hand across the uneven gravel toward the man, she smiled with relief at waking up from the long dark.

“There you are,” she said in a blurred voice to the radiant silhouette. “I’ve missed you so. I had the strangest dream. . . .”

Déjà vu swept over her, and her half-conscious mind groped after the feeling. Hadn’t she said this before? Hadn’t she said it many times as a small child, as she blinked up at her mother’s bewildered, frightened face?

Mommy, I had the strangest dream.

I dreamed I was—

She slammed awake for real. The brilliant radiance faded.

An unknown man knelt over her, silhouetted against the headlights of a car. She looked from the strange man to the ring of watching wolves and knocked away the hands that rested on her torso. Quick as a cobra, he grabbed her wrists and pinned her to the ground. She strained against the restraint, her heels scrabbling for purchase on the loose rocks.

The man shook her once, then again, harder, as she continued to struggle. “Stop it,” he ordered. His voice sounded harsh and rough as the rocks upon which she lay.

She was bewildered at the strange tricks her own mind played on her. She didn’t recognize this man. She had never seen him before in her life.

He was not Spring Jacket or Sport Coat. He was someone different. Someone new, bigger. Stronger, more deadly.

She made a terrified sound, bent her head and tried to sink her teeth into one of those iron hands shackling her wrists.

With an agile twist the man avoided her bite. The world pitched as he heaved her body up and around. He was so strong and fast, panic surged all over again at how easily he manipulated her weight.

She kicked and clawed for his eyes but somehow ended up sitting between long, powerful jeans-clad legs, crushed back against the man’s hard chest, her arms crossed in front of her while he held her wrists. She tried to butt her head back into his nose. He hugged her tight and buried his face in her neck.

She recognized the position. It was a safe restraint hold, and it was as effective as a straitjacket. The whiskery skin covering the man’s jaw abraded her neck, but no matter how she yanked or struggled, she couldn’t budge his long, tough body.

Finally, defeated, she stilled. Her blood pounded in her ears, her breathing serrated in the cold quiet night. Her captor’s breathing was unruffled. Gradually she became aware of the wolves’ sharp animal interest in the fight. She stared. The wolves, while a quieter presence, were as much of a bizarre image as the attacking hawks had been.

Hardly aware that she spoke aloud, she whispered, “I don’t understand.”

“Maybe now we can get somewhere,” the man said. His voice was rough velvet in her ear, the proximity mimicking a loverlike intimacy.

She shrank away as much as his tight hold would allow. The sense of profound recognition still beat at her, along with an upsurge of revulsion at his unwelcome nearness. She knew that she had never heard his voice before. The contradictory impulses were so strong, she felt like she was going insane.

“If you fight me or try to get away, I will tie you up,” the man said. “If you promise not to, I will let you go. If you break your promise, I tie you up and you stay tied up. No second chances.”

If he tied her up she was helpless and as good as dead. If she was free at least she had choices, and a chance to get away. Of course she said, “I promise.”

“Right,” he grunted. She knew he didn’t believe her, but he let her go anyway. She took the opportunity to scramble away from him, her shoes digging into the gravel until he warned her with three soft-spoken words. “That’s far enough.”

She’d only managed to get a couple of yards away, while her nerves screamed a chaotic, contradictory nonsense. She was still too close and needed to scramble farther away. But at the same time, she was too far away and needed to fling herself forward, into his arms.

And just as she had known about his voice, she knew that she had never seen his face before in her life.

There is a Goodreads giveaway of 20 ARCs of RISING DARKNESS.  The contest is running from March 1 – March 26th.  Please keep in mind, it is publisher sponsored, so I’m not running that contest, just giving readers a heads up.

Entering a Goodreads contest is quick and easy.  All you need (if you haven’t done so already) is to set up a Goodreads account, which is free.  The contest details are here.

The Kindle giveaway is my contest, and it IS international!  I am giving away my gently used Kindle, the power cord and a protective sleeve.  I am the only person who has used this Kindle.

Here is a photo of the prize:

1. Each contestant can have up seven (7) entries. You do NOT have to complete all seven steps to play. All you have to do to enter the giveaway is step #2. Completing any combination of the rest will just give you more chances to win.

2. +1 entry. Leave a comment for me here on my website blog at:  www.theaharrison.com/blog.  Comments made elsewhere, as for example, on Goodreads, Twitter or on my author Facebook page are fun to read, but they do not count as an entry.

REMEMBER:  to get extra entries for the contest, you must include in your comment any details you took from steps #3 and #4.

3. +3 more entries (for +1 entry EACH) for following me on Goodreads, on Twitter (@TheaHarrison) and on Facebook (www.facebook.com/TheaHarrison).

(You must include this information in your comment for contest credit!)

4. +3 entries (1 entry EACH) for 1) tweeting about this contest, 2) blogging about it, or 3) linking to it from your website, or other forms of social media.

Help me spread the word about RISING DARKNESS’s release on April 2nd!

(Remember, you must tell me where and include information on this in your comment on my blog for credit).

5. Anyone is welcome to enter this contest, and the giveaway is international / No P.O. Boxes, please.  Not for a Kindle shipment.

Have fun with the contest, and good luck!