From Thea:  I’m so delighted that author Carole Mortimer reached out to me in an email.  She had read DRAGON BOUND and enjoyed it.  We began corresponding, and then at the 2011 Romance Writers of America conference we were able to meet in person, and she’s just as delightful and warm as her emails were.

In her blog post here, she shares an extremely special experience with us, and a very great honor.  I’ve even got photos of how lovely she looked on her wonderful day!

My story starts a couple of days before Christmas 2011 – hey, I’m a writer, and I don’t know how else to tell this story!

So, it’s a couple of days before Christmas, and half a dozen Christmas cards have arrived in the morning post, along with an innocuous-looking envelope addressed to me.  Assuming the latter was a bill, I naturally opened the Christmas cards first – I love everything about Christmas, and consider sending and receiving cards from family and friends, as being part of the joy of the season.  It finally came time to open the innocuous looking envelope, which I duly did, quickly read the contents of the letter inside, before throwing it down onto the table beside me in disgust, with muttered comments like ‘it’s disgusting the scams people get up to nowadays’, and ‘at Christmas time too!’.  My husband came into the room about fifteen minutes later, and I showed him the letter, expecting him to be outraged too, but instead he picked up the letter, said he would be back in five minutes or so, and duly disappeared.  As he had said, he did reappear five minutes later, gently placed the letter down on the table beside me, and said softly ‘it isn’t a scam, Carole, you really are being asked to accept an invitation to attend the Queen’s Garden Party at Buckingham Palace in May 2012,in recognition of your outstanding service to literature’.  I actually began writing in 1978, and have just completed my 180th novel for Harlequin Mills and Boon, but even so…!

Now in my own defense, in regard to thinking it was all a scam of some kind, I would just like to point out that the second paragraph of the letter asked me for details of my passport, and that of the guest who would be accompanying me.

Secondly, things like this do not happen to people like me.  I was born in a small village in Bedfordshire, more years ago than I care to think about, the youngest of three children, and the only time I have ever seen the Queen, or any of the royal family, has been when they were being driven past in a car, or on the television.

Thirdly, I had never heard of a Harlequin Mills and Boon author having received such an honour, and if there are some of them out there then they probably haven’t talked about it for the same reason I haven’t – they were in shock!

I believe, along with the rush and bustle that is Christmas, that I truly did go into shock for a few days, and then I learnt that a dear friend was very seriously ill – Penny Jordan – and the whole thing just faded into the background.  Unfortunately we lost Penny on New Year’s Eve, and it was just so sad, that everything else paled into insignificance, and I really didn’t give the garden party invitation another thought until much later that month, when I finally remembered I had to send my acceptance.

Being of bit of a worry wart, I was still reluctant to share the news of the Royal invitation with anyone – what if it turned out to be a mistake, and they had the wrong Carole Mortimer? Or the official invitation, which they told me would be sent out in mid April, never arrived?  How foolish I would look, for ever having believed they could really have meant me in the first place!  So I told very few people, just close family – my Mum and Dad were so proud! – and three dear friends.

But to my surprise a buff-coloured envelope duly arrived mid-April, bearing a Buckingham Palace postmark, inviting myself, and my husband, to the Queen’s Garden Party, at Buckingham Palace, on May 29th, 2012.  One of those three dear friends asked me if I had very carefully opened the envelope so that I might frame it, along with the official invitation – but I’m sorry to say, that in my haste to see if it really was THE invitation, I had ripped the envelope open (perhaps a bit of sticky tape…?).

So, I now had six weeks in which to find something to wear – being superstitious, and that worry-wart, I hadn’t so much as looked at what I would wear for such an occasion.  And I had to wear a hat.  The instructions for the day, which had arrived in the envelope with the official invitation – we were not allowed to take cameras into the Palace, or have mobile phones switched on, nor would the official photographers be allowed inside the grounds – definitely said I had to wear a hat.  I never wear hats!  Not even to the weddings of two of my sons.  The gold silk suit was easy – I love the silk clothes from a certain shop, and they very kindly made the suit I wanted in the appropriate time.  The hat?  I’m not telling where I found the hat, but I’m sure you will agree, it goes perfectly with the suit?  And my husband – who retired when our youngest son was born, and hates wearing suits after having to wear them to work for thirty years – actually went out and bought a new suit and shirt for the occasion.  I was most impressed!

My husband – he’s such a romantic on the quiet! – had arranged for a suite for us at The Savoy, overlooking the river, for two nights, with a lovely bottle of wine chilling in a bucket of ice when we were shown into our suite – which I have to admit, we very much enjoyed drinking.  That was followed by the two of us going downstairs, and enjoying one of The Savoy’s Afternoon Teas.  I’ve always loved Afternoon Tea.  So much so that I’ve been known to decide on whether a hotel is any good or not by the quality of their Afternoon Tea!  The Savoy’s Afternoon Tea is, I am happy to say, the best in London as far as I’m concerned.  Absolutely delicious.

The following morning – the morning of THE garden party – it all started to seem so very real, when before it had all seemed like a bit of a dream.

Again, my husband – how I do love that man! – had arranged a surprise for me, in that he had arranged for The Savoy’s chauffeur-driven Rolls Royce (number plate S8 VOY) to drive us to Buckingham Palace, and collect us again at the end of the afternoon. 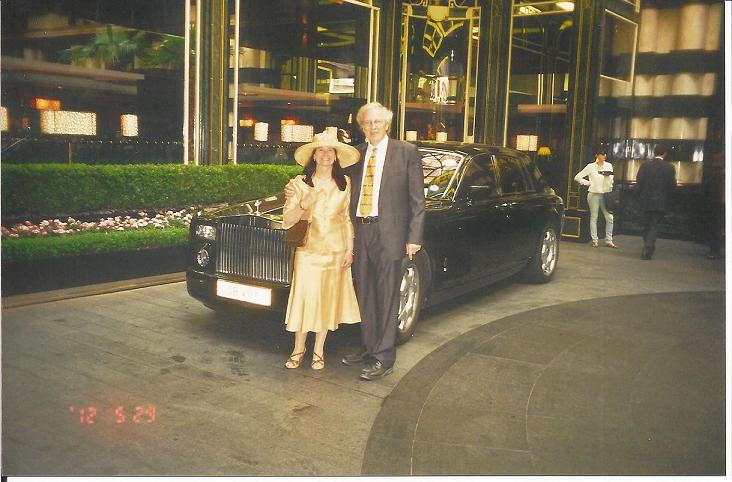 It was wonderful being driven through London in that lovely Rolls Royce, arriving at the Palace, and ACTUALLY BEING ALLOWED TO GO IN THROUGH THOSE BEAUTIFUL ORNATE GATES.

The gardens at the back of the Palace are extremely lovely; rolling lawns and beautiful beds full of shrubs and flowers.  The sort of garden where you could imagine children playing hide and seek in the bushes, with tree-houses or hammocks amongst the trees.  I hope that they did, and still do! 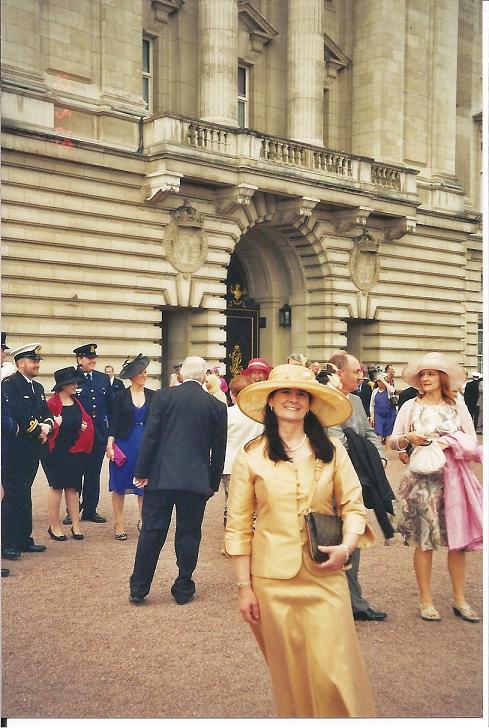 At four o’clock a dozen Beefeaters appeared in the garden in full Regalia, announcing the arrival of the Queen and the royal family.  The Queen looked lovely in lilac, and Prince Phillips was his usual debonair self in his morning suit, and it seemed incredible to think that they were 86 and 90 years old.  Prince Charles and the Duchess of Cornwall were also there.  And the Duchess of Cambridge looked lovely in pink – Prince William was, unfortunately, on duty, and so couldn’t accompany her.  Prince Harry was his usual friendly and handsome self.  The Princess Royal looked very regal.  Prince and Princess Michael of Kent were also present, and extremely charming.  Plus a number of other minor royals – I was so bedazzled by this time I honestly don’t know who else was there!

Afternoon tea was served all afternoon, a lovely selection of sandwiches and cakes, and hot tea or chilled coffee – and I can honestly say I have never eaten such delicious cucumber sandwiches.  They had put mint leaves in with the cucumber, and somehow turned a bland sandwich into a delight.  The newspapers the follow day stated that each guest at the garden party had eaten an average of thirteen sandwiches – thirteen! – and as I only ate three, and my husband six, I’m curious as to who ate the other seventeen…

It was an incredible, magical afternoon, and one I will never ever forget, along with the honour of the reason I had received the invitation – ‘in recognition of my outstanding service to literature’.

Carole is kindly offering a copy of her new Harlequin Presents book HIS REPUTATION PRECEDES HIM, which will be released in North America in July. 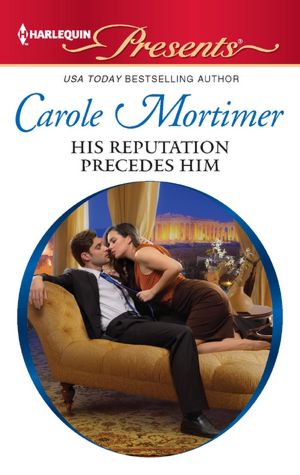 To enter her giveaway, please answer the following question:  have you ever had an English tea with cucumber sandwiches, scones and cakes?

The giveaway ends on Friday June 22nd, and the winner announced at 12 noon MDT.