From Thea:  Ilona Andrews is one of those wonderful authors that I have connected with through the magic of Twitter.  Initially we started talking because we both have Shit Tzus, which can be a challenge to get groomed properly.  I think very highly of her writing, adore her Kate Daniels series, and was very excited when she accepted my invitation to come visit this week.

This week she’s writing from the perspective of a reader as she talks wallpaper historicals.  She’s kindly offered a giveaway, and the details follow at the end of this post.

I write urban fantasy, some of it with a lot of romance elements, but I’m also a historical romance reader and I occasionally talk about books I’ve read.  That’s probably why this question landed in my email box.

“You recommend a lot of historic romances.  What’s your opinion on wallpaper historicals?”

For those of you who are not familiar with the term, a wallpaper historical is most often used to describe a romance novel that takes liberties with its historical setting.  It may feature anachronistic attitudes, wrong clothes for the time period, and other details that would not pass scrutiny by a historian.  For example The Mummy is a film version of a wallpaper historical.  It uses the ideas and details of Ancient and turn-of-the century Egypt, but it’s not historically accurate.

My answer is, depends on the historical. 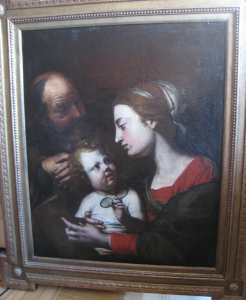 The poorly researched historicals are easy to spot.  They take themselves seriously, but get non-essential details wrong, such as having a Regency dandy flit about town in a gig (a single-horse cart used in the country) instead of a curricle (two-wheeled maneuverable urban carriage) or having a 12th century Scottish laird eating potatoes, which didn’t arrive to Europe until the late 15th century.  In real life, the Book of Mormon is perhaps the most well-known example of a narrative with many anachronisms.  When describing civilization of ancient America, it mentions domesticated horses and swine, wheat, silk, and chariots, none of which were introduced to the New World until the arrival of the Europeans.

I don’t care for the historicals that are poorly researched.  It’s just sloppy work. 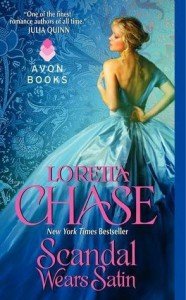 The deliberately inaccurate historicals take purposeful liberties with their setting in the name of artistic license.   It could be argued that Loretta Chase’s latest series Dressmakers is anachronistic by design.  The first book, SILK FOR SEDUCTION, paired a dressmaker with a Duke and the second, SCANDAL WEARS SATIN, has a dressmaker heroine and an Earl.  Marriages between aristocracy and commoners did occur in that time period, but only under dire straits, as in the noble would have to be severely impoverished. A wealthy Duke would not marry a poor dressmaker.

I like deliberately inaccurate historicals.  I view them as a fantasy on a historical theme, because let’s face it, if I want to read a historically accurate novel, I will pick up Sharon Kay Pennman.  When I reach for a romance novel, I want fun.  I’m perfectly willing to let go of certain historical details, if it means I get my entertainment.  For example, I love Eloisa James’  Fairy Tales.  Are they 100% strictly historically accurate?  No.  It says “fairy tale” in the name of the series.  😀

I don’t believe this is an either/or issue.  The genre has plenty of room for both fun fairy tale historicals and  the very well researched, accurate to the smallest detail works such as Joanna Bourne’s series or Courtney Milan’s historical romances.  I believe Courtney actually pays out of pocket for a historical copyeditor, but please don’t quote me on that.

It can also be argued that if we were to demand that all romances adhere to historical accuracy to the smallest detail, people would stop reading them.  For example, it wasn’t uncommon for a Scottish Highland laird, so often used in the romances, to beat his wife with a belt or a stick for infractions.  In fact, it was considered to be beneficial to a woman to be beaten.  An unmarried woman was considered to be ancient by twenty.  I’m with Felicia Day on this when she says in one of her Goodreads reviews

“AGE 24 IS NOT OVER THE HILL AND OLD! OMG IF THAT’S OLD AND SHE’S “LOST THE SPARK OF YOUTH” THEN I”M AN OLD HAG! I DO NOT WANT TO FEEL LIKE AN OLD HAG WHEN I READ TRASHY ESCAPIST LITERATURE.”

There you go.  Yes, it’s historically accurate and I even did it in STEEL’S EDGE, when a slaver expresses regret that Charlotte is thirty, because if she was fifteen years younger, he’d get more money.  But I don’t want to feel like I’m an old hag either.  Furthermore, all those witty conversations and fun repartee we see in the historical romances of the 18th and 19th century is an anachronism in itself.  Here is Leo Tolstoy (whose father was a Count from one of the old Russian noble families) for you:

“The vicomte appreciated this silent praise and smiling gratefully prepared to continue, but just then Anna Pavlovna, who had kept a watchful eye on the young man who so alarmed her, noticed that he was talking too loudly and vehemently with the abbe, so she hurried to the rescue. Pierre had managed to start a conversation with the abbe about the balance of power, and the latter, evidently interested by the young man’s simple-minded eagerness, was explaining his pet theory. Both were talking and listening too eagerly and too naturally, which was why Anna Pavlovna disapproved.”

You know what else is anachronistic in the current romance novels?  Hot sex. Not that sex didn’t exist – it did – but grabbing a heroine and dragging her off to seduce her somewhere on the balcony while the ball was going on?  Nope.  Most marriages were arranged, the interaction of males and females was strictly controlled among the upper class, and furthermore, it is highly likely that young people of that period weren’t savvy enough about sexual education to engage in some of the more adventurous things.

As a mother of teenage daughters in the age when sexual education materials are readily available, I can tell you that it is amazing what the kids do and don’t know.  They keep coming up with the weirdest nonsense, and when I tell them that they’re wrong, they run off to the internet to try to prove that they are right.  I finally bought a book on sexual education and now refer them to it.  Certainly there were some books that dealt with those topics – and here is an interesting blog post about them – but they were not readily available and not all of young nobles had parents or governesses who would take time to explain things or would even broach the subject.

Even now, with all of the information that is out there, poor Dan Savage has to travel to college campuses and explain to college students the basics of sexual education.  Let’s say you’re a sixteen year old girl, and you’ve spent your life learning etiquette and dancing and having almost no unsupervised interaction with young men of your age.  You don’t know what the sexual parts of male anatomy look like.  How would you react at the suggestion of performing oral sex?

Another anachronism?  Happily Ever After.  HEA is perhaps the most important aspect of romance genre, and many readers, myself included, like epilogues when a happy couple is shown enjoying family life with their children.  Cold harsh reality: the historical Europe had lousy health care and atrociously high child mortality.  King Stephen of 12th century England, while not being a great king, loved his wife Matilda with all the passion of a proper romance hero.  She loved him back.  They had seven children.  Five survived to adulthood.  This is the King of England, who presumably had access to the best medical care of the times. When looking for escape,  I don’t want to read about dying babies.  🙁

In the end, it’s up to the the individual reader how much historical inaccuracies he or she can endure.  There are times when historical inaccuracies aggravate me and then there are times when I just want a love story with pretty dresses, hot nobles, and improbable adventures.  That’s the beauty of the romance genre – there is something for everyone.

Readers:  what are some of the historically inaccurate novels you’ve read and enjoyed, and why?

Answer for a chance to win copy of Gunmetal Magic.  Important note:  Gunmetal Magic comes out on July 31st, and this prize will be shipped when Ilona received her reader copies.