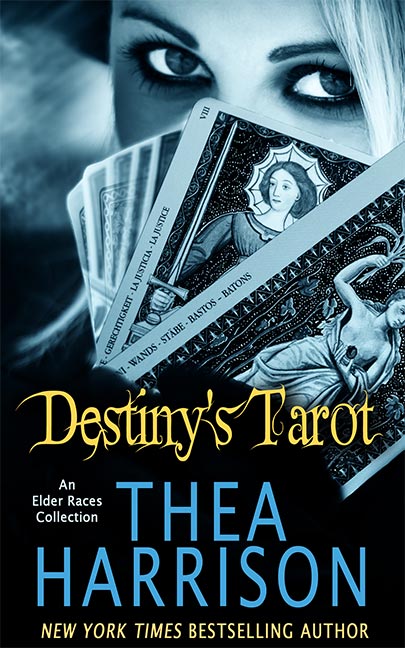 This book contains Devil’s Gate and Hunter’s Season, the last two Tarot novellas in the Elder Races series, where the stories follow the path of a mysterious Tarot deck.

Destiny’s Tarot is available in both print and audio, whereas the novellas sold individually are only available in ebook format.

Devil’s Gate:  As a coroner, medusa Seremela Telemar has always felt more comfortable chatting over a dead body than over drinks. But when her wild niece, Vetta, runs off to Devil’s Gate, a lawless town that has sprung up overnight in a modern-day gold rush, she knows she has to extricate her before the rebellious girl gets into real trouble. Though she’s confident in her head snakes’ ability to defend her against attackers, Seremela is still a bit nervous about braving this modern-day Wild West by herself.

Vampyre Duncan Turner is not about to let his new co-worker go into that chaos alone. His Vampyric power and lawyer smarts make him the perfect ally, and the fact that he already had his eye on Seremela for more…personal reasons, doesn’t hurt matters. Any romantic thoughts pull up short, however, when they arrive at Devil’s Gate and learn Vetta is set to hang by morning.

In order to save Vetta and themselves, Seremela and Duncan are going to have to fight fire with force and magic with fangs. And pray they make it out of Devil’s Gate alive.

Hunter’s Season:  As a palace guard and assassin for the Dark Fae, Xanthe always wore a mask, hiding her emotions to do her duty. But when her identity is compromised, she trades undercover work for guarding Queen Niniane—a position that often brings her in contact with Chancellor Aubrey Riordan.

Aubrey’s trust is shattered. A year ago his wife tried to assassinate their new queen in his name, a betrayal of everything he believes in. And now an attack on his life is proof the dark conspiracy is not yet over. Although injured and weak, Aubrey can’t help but be drawn to this shy assassin and loyal protector. Xanthe is everything Naida wasn’t, and the passion she stirs in him is something he thought had long passed him by.

Warning: Take a man recovering from an assassination attempt, the assassin sworn to protect him, add in a magical Tarot card deck and an isolated cabin, and watch the sparks fly!