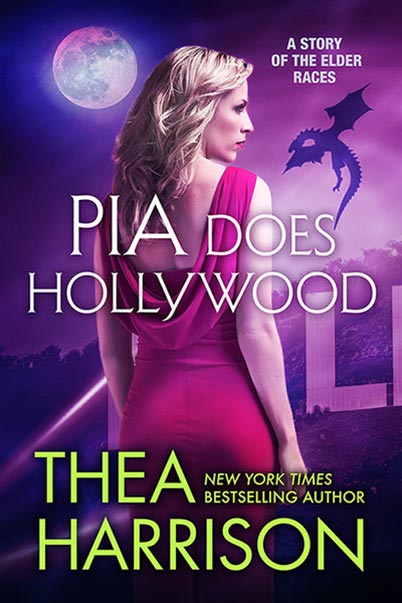 After making a diplomatic pact with humankind and the other leaders of the Elder Races, Pia Cuelebre, mate to Dragos Cuelebre, Lord of the Wyr, reluctantly heads to Hollywood to spend a week with the Light Fae Queen, Tatiana, before the busy Masque season hits New York in December.

Dragos has never let the lack of an invitation stop him from doing anything he wanted. Unwilling to let his mate make the trip without him, he travels to southern California in secret to be with her.

But when an ancient enemy launches a shattering assault against the Light Fae, Dragos and Pia must intercede. The destruction threatens to spread and strike a mortal blow against all of the magically gifted, both human and Elder Race alike.

Working with the Light Fae to neutralize the danger, Dragos and Pia find their deepest vulnerabilities challenged and their most closely held secrets threatened with exposure.

PIA DOES HOLLYWOOD is the second part of a three-story series about Pia, Dragos, and and their son, Liam. Each story stands alone, but fans might want to read all three: DRAGOS GOES TO WASHINGTON, PIA DOES HOLLYWOOD, and LIAM TAKES MANHATTAN.