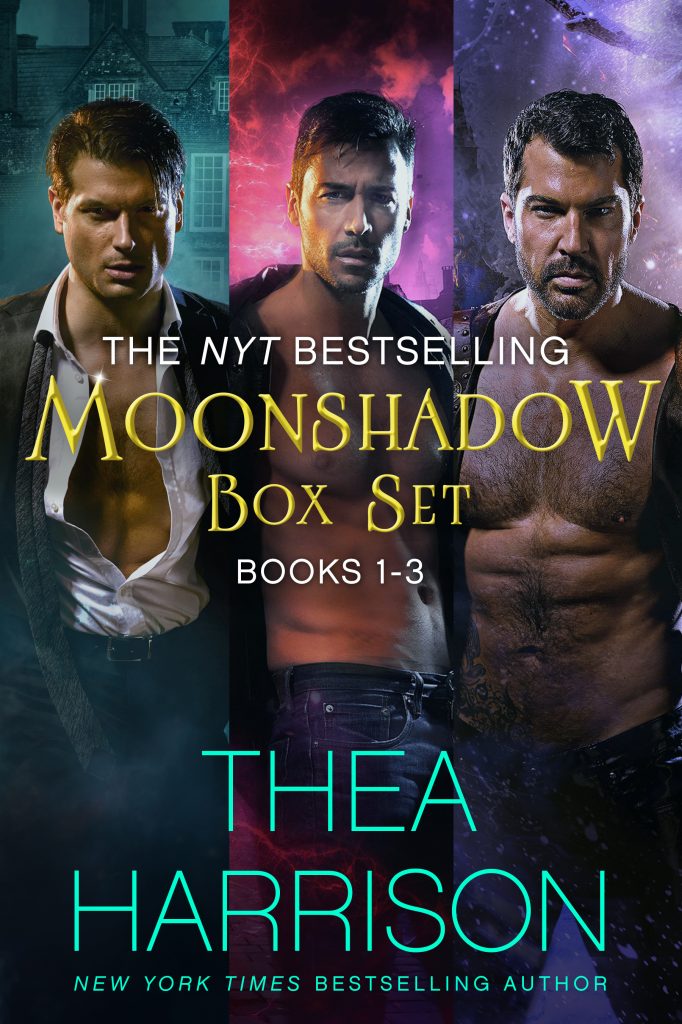 This box set contains all 3 novels in the New York Times bestselling Moonshadow trilogy, complete and unabridged. Prepare to enter a realm of magic, danger, and passion. Welcome to the world of the Elder Races.

While in the U.K., ex-LAPD witch consultant Sophie Ross finds herself unwittingly ensnared in the millennia old conflict raging between the Light and Dark Courts of the Fae.

Barred from their homeland, Nikolas Sevigny and his fellow Daoine Sidhe Knights of the Dark Court are desperate to return to Lyonesse and thwart the advances of Isabeau, the deadly Queen of the Light Court.

Nikolas believes Sophie is the key to unlocking the barriers keeping him from his homeland, and the reluctant allies find themselves inexplicably drawn together. As magic threatens Lyonesse, Queen Isabeau unleashes her merciless Hounds, and Nikolas and Sophie become embroiled in a race for survival. Despite the danger, the passion simmering between them ignites. Will they have a chance to explore it, or will they fall victim to the Queen of the Light Court?

Kidnapped for her musical ability and cruelly punished for refusing to share it, human musician Sidonie Martel is trapped in the mystical land of Avalon, broken and alone except for one mysterious man.

Morgan le Fae may be one of the most powerful sorcerers in history, but for hundreds of years he’s been enslaved to Queen Isabeau of the Light Court.

Sidonie reawakens in Morgan feelings he had believed were long dead. For Sidonie, the passion she feels with Morgan provides illusory safety in a perilous situation. But Isabeau holds Morgan bound in magical chains that only Death can break. And in the court of a cruel, jealous Queen, the only thing that burns hotter than love is revenge.

The Dark Court faces its most deadly peril yet. Its ancient enemy Isabeau, Queen of the Light Court, is obsessed with its annihilation, and King Oberon, fierce protector of the Dark Court in Lyonesse, has been laid low by an assassination attempt.

As Isabeau prepares her attack, Kathryn must set aside her own unrequited feelings and help Oberon regain his emotions. Because if he doesn’t care to fight for his people and Court, Lyonesse itself may be destroyed.