I am a period clothing and guy-liner wearing adult goth who sings opera and practices holistic healing through Reiki, Shamballa, and crystal therapy. I write although all my publishing credits have been academic in relation to my past work at the maximum security unit of a psychiatric hospital. Currently, I am employed by a non-profit organization in their community outreach program which travels to local schools giving performances, lectures, and presentations on health and wellness. I also run a cemetery preservation group and recently started my own clothing line. When there’s down time, I film music videos, sculpt, and devise imaginative ways to get into mischief. 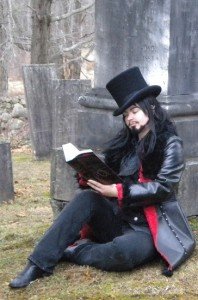 I picked up my first romance — a historical romance — accidentally. I was sixteen, a bibliophile even then, but still doing the hyper-masculine routine that society seems to delight in spoon-feeding us from the moment we’re born. Mostly out of strict adherence to the Rules of Manliness, I abhorred romance. You could tell the books from a mile away, usually with bright purple or floral covers with raised and metallic titles or, even worse, the illustrations of large strapping men who’ve clearly done testosterone for ages and women who look like they’re in pain. There’s nothing less stereotypically manly in terms of genre packaging so I avoided it avidly. This was pre-internet-in-every-household, so when I got a recommendation for a book from one of my friends, I went ahead and looked for it. My horror was boundless when the little 80yr old woman who ran the used book shop presented me with a… purple floral book with a raised metallic title. I took it with two fingers, not wishing to get anywhere near it. I didn’t make eye contact. I was so ashamed, but I’d already had her get it and I felt obliged to complete the transaction. Because I’d felt obliged to purchase it, I felt obliged to read it. I was pleasantly surprised.

Why does reading romance “click” for you?  Conversely, do you find room for improvement in the genre in general (or any sub genre in specific)?

I’d hesitate to say that romance “clicks” for me. Themes click, concepts click, but themes and concepts click no matter the genre. What I do find to be the romance genre’s strength is the freedom to explore inter-character development. I read a great amount of scifi/fantasy, but most of the time, when a male protagonist finds a love interest, it seems to be because she’s the only female in the book. I like to know the *why* of things and I feel if I’m going to invest my time in reading a book, I think I should understand why two characters are attached to each other rather than feeling like they are only together to ensure the survival of their species (unless that’s the basis of the plot, in which case, I get it and I’m okay with that).

I think the true problem with the genre — and I could talk about tired formulas and many authors whose books seem to talk down to their readers but I won’t — is sexism. I suppose by the very fact that I’m writing this and that the Male Romance Reader is regarded as a mythical creature makes the romance genre extremely sexist to all parties. I cast no blame at anyone for this — it’s a societal construct fortified throughout centuries. I’ve noticed however that when I’ve read a book written by a guy, it’s classified as fiction or fantasy — even if it really should be general romance or paranormal romance or erotica. Apparently, if a man writes it, it can’t be romance which makes no sense to me. I am aware there are some exceptions, but those male romance writers have mostly taken up female pen names… and why is that? It’s because romance is unofficial Realm of Women — for some women by choice, and for some women because the fantasy/scifi or fiction/literature sections won’t take their writing seriously.

For us guys, we’re expected to be the strong silent pillars of strength, epitomes of stability and stoicism. Now, I can’t speak for any other guy, but I’m only human and I have emotions (gasp). However, by those sacred Rules of Manliness, we’re not allowed to let anyone know about them. Now as much as I love a good fantasy novel or a brilliantly presented scifi, most of them lean on the cold dispassionate side, all about saving the world in the last ten pages, and if a character has an emotional bond with another character, it’s because they were the last breeding pair on their planet. Forced by societal expectations to be this unfeeling block of masculinity day in and day out, the unemotional manliness schtick gets old. My girlfriend provides an outlet for The Softer Side of Guys, but only so much because she too expects me to fulfill this masculine ideal. Sometimes, this means I need a good indulgence in emotionality and that’s where the romance genre steps in. I don’t believe in books-for-men or books-for-women — I believe in good stories, good writing, and books-to-be-enjoyed-by-all.

I don’t have a favourite romance author. I usually only read one or two books by any romance author even if they have dozens out — mostly due to themes. For instance, my very first romance novel, Tapestry by Karen Ranney — formulaic and predictable but I thought entirely endearing and intelligent with characters I rooted for the whole time — as much as I enjoyed it, her other work pertains to the Scottish Highlanders, a common category for historicals, but one which holds absolutely no interest for me.

For non-romance authors, I am addicted to Tanith Lee who twists the mind and challenges perceptions. I’ve also greedily devoured every word of Carol Berg whose mastery in character-torment is wielded to devastating effect. Jasper Fforde’s works of wit and intellect also place him among my favourites. I also enjoy the scifi staples of Isaac Asimov, Frank & Brian Herbert, and Douglas Adams.

It would be intelligent, have decent and realistic dialogue, and not have the central plot based around an off-hand miscommunication which could easily be cleared up if the characters actually spoke to each other about it. I’d also like the characters to be a bit deeper than “wow, that person is the most attractive fe/male I’ve ever seen — so I’m going to end up with her/him!” That gets overdone too, in all genres — probably why I’m mostly interested in romances where one or both of the main characters aren’t pretty to look at. It’s decent realistic conflict right away without having said a word to each other.

I do understand why you’re interested in the perspectives of the Male Romance Reader. Like I’ve said, we have the distinction of being treated like mythical creatures, but my reasoning for why we seem so rare is because few of us don’t want to break the Rules of Manliness and admit to it. So, in truth, how much response did you think you would get, if any?

ME:  I started this on impulse one day, and I had no idea what to expect. From tweeting, and from posting on Facebook and Goodreads, I got fifteen responses.  I was very pleasantly surprised.

I’m not someone who goes out of his way to read romance. It’s like any other genre to me. If something sounds compelling or interesting or fresh about a book, I’m tempted to pick it up. If it’s recommended, I’ll take a look. Will I walk down the romance aisle at Barnes and Noble to find something? Probably not. I can’t imagine getting assaulted by purple floral covers with raised metallic titles and illustrations that would make the naked ladies in the Bower of Bliss blush. But I’m not afraid to admit that I’ve read romance. And I’m not afraid to admit that I actually like some of it.

Thanks for visiting today, Valt—I appreciate you taking the time to answer my questions!