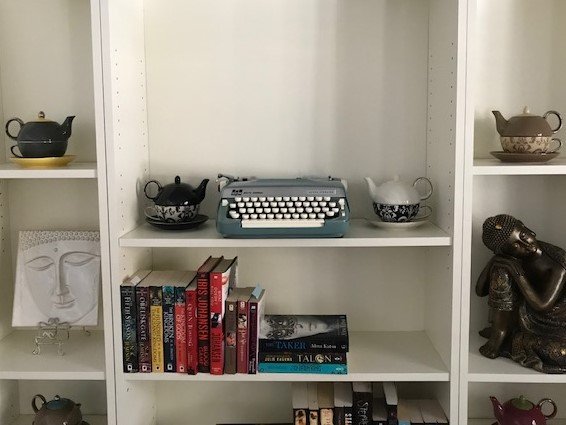 I’ve been meaning to write a blog post for a while, but life has been getting in the way until now. Today I want to share a photo of my Christmas present from my daughter and her husband. The sellers of my new house had collected antique typewriters, and inspired by some of the photos, they bought me the Smith Corona typewriter shown on the shelf here.

I’m not much of a collector in general, but I am entertained by the idea of collecting a few old typewriters. Whether or not I follow through on the impulse is another matter. For now, I’ve been enjoying the sight of this one and some of the memories it has brought to the surface.

You see, I wrote my very first novel on a Smith Corona – not a model exactly like this one, because mine was an electric portable typewriter, but the color is very similar and when I put my fingers over the keys they feel the same. My body remembers that first typewriter I owned.

I was nineteen, and I’d been reading voraciously my whole life. When I was around twelve, I started reading romances, inspired by a family visit to my aunt and uncle’s house. They lived in deep country, so there wasn’t really much for a child to do except play outside (which I did) and read (which I did insatiably). The only fiction they had were Zane Grey westerns and romances – Harlequin romances, stories by Barbara Cartland, Emily Loring, Georgette Heyer, etc. I gobbled up both the westerns and the romances. When we went home, I didn’t pursue reading westerns, but I did keep reading romances.

Eventually, as I grew older, I started saying to myself, “I think I could do this. I really think I could write a book.” Then when I was around 16, I read an article in People magazine about successful romance authors. That article was responsible for turning me serious. The authors came from all walks of life. Janet Daily had been a secretary. This budding dream of mine was actually possible, I thought.

My teenage years were hit with a lot of challenges. My mother died from cancer, and I ended up in a young marriage, and then I ended a young mother, myself. My husband at the time and I were both college students, and we were struggling financially. Desperate to do anything to change my circumstances, I bought my little portable electric Smith Corona typewriter, took copious notes and created an outline, and wrote a book late at night while everyone else was asleep. I was short on sleep and strung out on coffee for months.

When I was finished, and I had edited the story, I sent to Harlequin Mills & Boon in Canada. And I waited, and waited. Finally after several months went by, I wrote them to follow up.

And I heard back from them. They had found promise in the story and had sent it on to the London office. An editor contacted me and requested changes, which I completed with feverish excitement… and my first book was sold, and published in 1981 (A Deeper Dimension).

For several years, I didn’t know any details about how I had gotten lucky – I only knew that I had. It was much later than I found out that, at that time, they received something like 10,000 unsolicited manuscripts a year, and they only accepted 4 to 6 new authors a year. I was one of the lucky ones, and for several years I was their youngest author.

I enjoy looking at this typewriter and remembering writing those early stories, and I hope you enjoy this story of how it all started.