NIGHT’S HONOR: a Peek Inside!

Oooh!  This is exciting!  I (Janine – Thea’s assistant) get to post a couple of excerpts today from Thea’s next Elder Races novel (book #7, NIGHT’S HONOR), which will be available on September 2, 2014.  It is available for pre-order now.  Click on any of these links to pre-order your copy today:

I just read the book this week – it is REALLY GOOD!  I can’t wait for you all to get it in your hands so we can chat about it!  But in the meantime, some juicy snippets and another look at that gorgeous cover will hopefully tide you over. 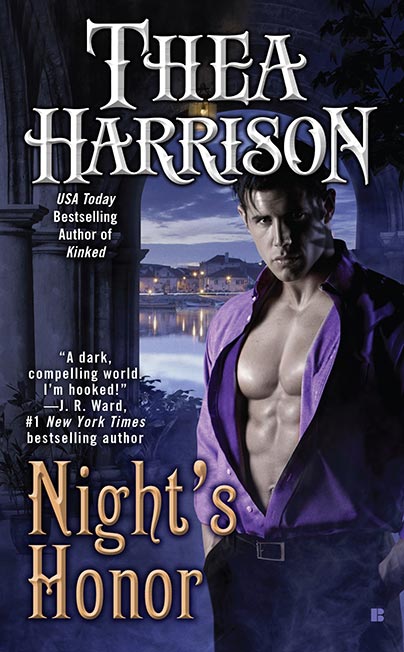 Oh, yes… Xavier del Torro is just that HOT (or should I say, CALIENTE?)!

Here’s the blurb from the back cover to give you the storyline:

From the author of Kinked and Oracle’s Moon…In the USA Today bestselling author’s latest Novel of the Elder Races, a woman finds herself in need of protection—and seduced by honor…

On the run from her former employer, Tess knows that she’s vulnerable on her own amongst the Elder Races. That’s why she decides to audition to become the human attendant of a powerful Vampyre of the Nightkind demesne. But while her position affords her the safety she seeks, her protector turns out to be more than she bargained for.

The right-hand man of the Nightkind King, Xavier del Torro is both terrifying and alluring. While his true nature frightens Tess, she can’t ignore the appeal of his innate sense of integrity and self-restraint. Thrown into Xavier’s world, Tess must quickly learn to navigate the dangers—both to her life and to her heart. But the biggest threat comes from her own past…

Now, I’m going to share a couple of excerpts – just keep in mind that the book is still in the editing stage, so it is subject to a few minor tweaks, which means that what you see here may not be verbatim what gets published, but it’ll be close.  Our main characters are Xavier del Torro, a Vampyre whom you’ve met before if you’ve been reading the Elder Races series, and a new character – a young human woman named Tess.

“Are you afraid of all Vampyres, or is it me?” He didn’t look as if he would be terribly bothered by her answer, either way.

Oh, to hell with it. It wasn’t like she could truly hide how she felt anyway. He was reading her as easily as he had read his book.

“I’m intensely uncomfortable around all Vampyres, but even more so around you.” She forced a deep breath into her constricted lungs. “Is what they say about you true?”

He lifted one sleek eyebrow. “To what are you referring?”

She met his gaze. “That you were a priest when you were human. The Inquisition killed your family, and that was when you became a Vampyre—and you went after all of the Officers of the Inquisition until everybody who had been involved was dead.”

Something glittered deep in his eyes, a fierce, hot spark of reaction, until his eyelids lowered again to cover the expression, and he looked as cool and collected as he had before. “Yes.”

It was the smallest betrayal of feeling, that spark, but she had seen it, and her perception of him altered again.

What kind of rage and pain drove a young man to end life as he knew it, so that he could bring justice to those who had killed his family?

And then, later in the book, the heat gets turned up a bit – as we’ve learned to expect from Thea!

Over the centuries of his existence, he had witnessed so many things— miracles and tragedies, and mysteries that were simply unexplainable. He’d had considerate, humorous lovers, and he’d enjoyed every one.

None of it compared to the miracle of holding Tess’s body against his. Seeing the utter lack of fear in her flushed, angular face, when she had once been so afraid of him.

Realizing the passion that glazed her beautiful eyes was all for him.

“’Thy love is better than wine,’” he whispered against her softened, sexy mouth.

He brushed his lips down the side of her cheek, along the clean, graceful curve of her jawline, and kissed her slender neck. Her skin. Dear God, was there anything else as perfect as her skin?

She cradled his head in both hands, her uneven breath sounding in his ear. “What was that? Were you quoting something?”

“Love poetry,” he muttered, kissing along her collarbone as he ran his hands underneath the hem of her sweater. “From the Song of Solomon.”

An exhalation of a laugh shook out of her. “You’re a romantic?”

“I was, once upon a time,” he admitted. He curved his hands around her narrow ribcage. She fit so perfectly against him. “I still am, on occasion. When life permits.”

“I’m not a romantic,” she confessed. Nuzzling his cheek, she slipped his jacket off his shoulders. He shrugged it off and let it fall to the floor.

“I forgive you,” he told her expansively, with a grin.

Anyone else craving a glass of wine…?