From Thea: Elyssa Patrick is one of those wonderful authors that I have connected with through the magic of Twitter. I was very excited when she accepted my invitation to come visit this week. Check the end of the post for contest details. Take it away Elyssa!

Thanks so much, Thea, for having me on today! And congrats on the release of RISING DARKNESS!

When I was writing ONE HIT WONDER, I seriously thought no one would like it, including my critique partners. The hero, Damon Suarez, was unusual, to say the least. Damon wasn’t the typical broody Alpha male—he was a one hit wonder and seemingly embraced the label. He was an uncomplicated guy, and I didn’t think he’d be well-received. But he made me laugh, and I loved writing him. For the most part, readers seem to like him. It got me to thinking why that was . . . and what exactly made this “different” hero so accepted. (Honestly, I still think it was a whole lot of luck.)

So, I thought I’d ask directly from the source. Without further ado, here’s Damon Suarez, hero and star of ONE HIT WONDER. 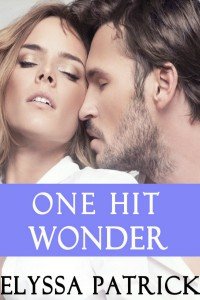 Me: Damon, I’m talking about you and—

Damon: My favorite subject. But I think I’ll need a drink for this. The usual, Patrick. Three ice cubes—

Me: And chocolate milk on the rocks with a mini umbrella. I know what you like. I did write it after all.

Damon: I’m sorry, Patrick, but my ears thought they heard something ridiculous. You wrote it? Hahaha. I told you, but I’ll let you think otherwise, you little writer, you.

Me: Anywayyyyyy . . . I was just telling everyone that I was surprised people liked you.

Me: I know. You keep telling me this.

Me: I was going to say tight. Very, very tight.

Damon: Cockhuggers are the next fashion thing. It encourages all the blood to flow to the head.

Damon: Not that head. The head upstairs. Geez, Patrick, you’ve got a dirty mind.

Me: Be thankful for that. Otherwise no more smexytimes for you and Jane. So, why do you think people like you? Besides the clothes and that you’re awesome.

Damon: Don’t forget the butt shake. I don’t know, Patrick. I love Jane and I respect her. Readers like me because how can they not? I put the adorbs in adorbsable.

Me: Adorbsable isn’t even a word.

Damon: It is now.

So, there you have it. Clothes, butt shakes, and respect. 🙂

With heroes—no matter if they’re broody Alphas or carefree one hit wonders like Damon—that there’s always a common principle to why readers love them: the hero respects the heroine.

The hero might be all macho, like Tack in Kristen Ashley’s MOTORCYLE MAN; a powerful dragon shapeshifter like Dragos in DRAGON BOUND; a charming rake in Tiffany Clare’s MIDNIGHT TEMPTATIONS WITH A FORBIDDEN LORD; or a sweet, divorced kindergarten teacher in Tamara Morgan’s THE REBOUND GIRL, but deep down, these heroes have a deep abiding respect for the heroine. Sure, they might grumble a bit and give the heroine a hard time—but the respect is there, as well as the hero’s determination to put the heroine first and make sure she’s in his life.

Because, really, there’s nothing sexier than a man who respects a woman, reevaluates things in his life for the heroine, and then goes after her.

There was only so much torture a man could take.
He strode toward her, stopping when he was an arm’s length away.
She rubbed her lips together, her blue-gray eyes widening slightly as her breath quickened.
“It’s the whiskey,” she said on a whisper, the words stealing over the slight breeze, each syllable wrapping around him like a boa constrictor, slowing squeezing until they’d bled into him.
He shook his head. Not to get the words out of his system. No, he wanted to keep them in. It was directed at her meaning, at her feeble attempt to cover what couldn’t be covered—not from him anyway.
“It’s not the whiskey,” he said.
And then he extended his arm, his hand closing around her wrist and spun her into his hard body, where she fit exactly as if she belonged.
“Damon,” she said breathily.
Yes, he thought wildly, yes, he could get used to hearing his name uttered on such a sigh.
And even more, he wanted to hear how his name sounded when she came in his arms . . . or when she’d lowered her battlements and entrusted him with something he wasn’t sure she would ever let him be entrusted with.
But he had nine days to convince her . . . he was a very determined man, after all, and although he was clinging to fame, people still knew his name. He wasn’t forgotten.
And Jane wouldn’t forget him.
Not now, not ever if he could help it.
He desperately wanted her.
How he wanted her.
He dipped her over one arm, her arms looping around his neck, her hands clasped at the nape where her fingers grazed his hair.
A shudder wrecked through him at that touch.
She’d noticed, for her eyes widened even more, blue-gray saucers of wonder in that heart-shaped face.
“Damon,” she whispered again.
He said her name, not like a victory march, as if he was about to claim something that was his. Because she was not his—he had no claim over her. She was not something to be won.
She was more than that.
“Jane.” Her name was reverent, a hushed prayer of Hallelujah, a chord of harmony—an unbroken sound, one word that encompassed his world that he hadn’t even known about until now. He was no Galileo but rather a Columbus who had landed upon a new world without realizing it until told otherwise.
But unlike Columbus he wouldn’t plunder and steal, rob or beg . . .
Too much.
He gave her time to push him away. Five minutes past midnight, but the darkness didn’t cloak around them, the lights were too bright to hide anything.
Careless of anything but this, of her in his arms, of her blue-gray eyes going pewter, her tongue dipping out to wet her lips, and the way her breath caught . . . Damon did what he should have done long before now.
He kissed her.

1. Keep her distance from her sexy boss, the once famous pop singer, Damon Suarez.

3. And not let Damon know she loves him.

1. Convince Jane to not quit.

2. Stage a comeback and be more than a one hit wonder.

From Thea: Thanks Elyssa! Now for the contest.

In Elyssa story Damon is a one hit wonder. I wonder what song was a hit for him. Hmm. What are your favorite one hit wonder songs? Leave a comment to enter to win an ebook copy of ONE HIT WONDER and AS YOU WISH.

We’ll draw the winner on April 12th at 12 noon MDT (2pm EDT) and announce them on the blog. The winner must contact us at info@theaharrison.com by 5pm MDT (7pm EDT) Monday, April 18th  to claim their prize.