From Thea: I’m thrilled to have guest author Laurie London visiting on my blog this week. Laurie is another one of those writers I have connected with through the magic of Twitter, and she is absolutely fantastic. Be sure to check the end of the post for details on her giveaway. Take it away, Laurie!

Thanks so much, Thea, for inviting me to your blog today! And congrats on the release of RISING DARKNESS, which kicks off your new Game of Shadows series. I can’t wait to sink my teeth into it!!!

I read Vivian Arend’s post the other day about what it means to “write what you know.” As a fellow paranormal romance author, that advice always makes me chuckle too. While characters in my books kill people, travel to faraway places, escape from killer vampires, use special powers, and step through portals into new worlds, I’ve never done any of these things myself. As an author, however, I need to write as if I have.

Last month, I had the privilege of attending a hands-on workshop given by agent extraordinaire Donald Maass, author of some of my favorite how-to-write books. The man is a writing yogi. Seriously! At the beginning of the workshop, he actually had us all close our eyes and empty our minds (remember that scene in Total Recall with the mutant? “Open your mind.”), then he talked to us softly. Over and over he had us imagine events and emotions that happened to us in our own lives then told us to translate them to our stories and characters. (He should do a downloadable podcast. I’d totally buy it.)

What was our greatest regret? Our greatest fear? Our secret desire? When did we feel the most alone? Abandoned? Hopeless? The greatest joy? Then, although our characters’ experiences will be different (being taken prisoner and forced through a portal is something I’ve never had happen to me personally), we can draw upon those same emotions and give them to our characters.
Even though the trigger event will be different, the emotion is the same.

Here’s an excerpt from my latest book ASSASSIN’S TOUCH, book 1 of the Iron Portal series, where Neyla is being forced to go through a portal into the world of her enemy. To convey her feelings of panic, being trapped, alone, scared, I recalled a time in my life when I felt those same emotions. 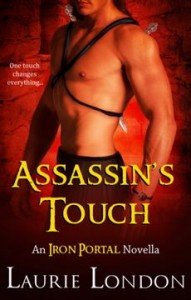 * * *
Neyla had to put as much distance between the two of them as she could possibly manage, and then maybe, while he wasn’t looking, she could take off.
Digging her fingernails into her palms, she took a step backward. Then another. And another.
“Stop. Do not move from me again.” The man turned to face her with a look that said he knew exactly what she was planning.
“Why… What… I will not have sex with you.” She looked up in order to avoid staring at his amazing physique, but even the stalagmites or stalactites—whatever seemed phallic. “It’s not going to happen.”
His laughter boomed through the tunnel, as if what she’d said was the most ridiculous thing he’d ever heard. “That is not my intention, little soldier. These garments are some of my favorites. I don’t want them destroyed.”
It took a moment for his words to register. Relieved that he didn’t plan to force himself on her—if she could believe him—she kept her gaze averted from his brazen nudity. “I don’t understand.”
“What don’t you understand? That I’m fond of what I’m wearing?”
“Why your clothes would be destroyed.”
One of his eyebrows shot up. “Are you being serious with me?”
Why would he think she was lying?
“Don’t they teach that intelligence over here?” He pronounced the word as if it was foreign to him.
She had no idea what he was talking about, which made her feel a little stupid. Maybe she hadn’t been paying attention during orientation like she should have. They had crammed a lot of material into the few short weeks before she was assigned to a field unit.
He rubbed a hand over his raven hair, still clearly confused. “Clothing disintegrates during the portal crossing, and I rather fancy what I had on today. But it’s your choice. You can disrobe now or later. Either way, you will be unclothed when you reach the other side. Do you have any weapons on your person that I didn’t find?”
“N…n…naked?” Why hadn’t she heard this about the portals? It wasn’t exactly a minor detail. She grabbed the lapels of her uniform, tugging them closer around her neck.
“Answer me.” He acted vaguely pissed off and she didn’t know why.
“Weapons? Uh, no.”
Narrowing his eyes, he looked her up and down. She fidgeted under the intense scrutiny. “So you had no idea why they’re called Iron Portals?”
“I…I never really thought about it.”
He shook his head, as if he wasn’t sure he believed her. “You are carrying no weapons other than those I found? Because if you’re lying to me, soldier, you will regret it.”
It occurred to her that this could be some sort of psychobabble designed to weaken her. Wasn’t that the first step in breaking the enemy’s will—get the prisoner to voluntarily do what you ask, like surrender any hidden weapons? “Is that a threat?”
“I don’t threaten, little soldier—or play games—but if you are carrying any iron-based metals when you cross over, you could die. Believe me…death by iron sickness is not a pleasant one.”
“And why should I believe that you care if I die or not?”
“I don’t,” he said flatly, “but as a Talent, you’re valuable to us.”
* * *

Laurie London is the author of the Sweetblood and Iron Portal series—dark, sexy paranormal romance, set primarily in the Pacific Northwest. Publisher’s Weekly calls the Sweetblood series “sexy” and “sizzling.” Her latest release, ASSASSIN’S TOUCH, kicks off the new Iron Portal series, and is a finalist in the National Excellence in Romance Fiction Awards.
Laurie loves talking to readers. You can find her online here:
www.LaurieLondonBooks.com
www.facebook.com/LaurieLondonAuthor
www.twitter.com/LaurieBLondon

From Thea: Thanks, Laurie. And now for the contest.

In Laurie’s Iron Portal series book ASSASSIN’S TOUCH Neyla is a Talent. Which of course you’ll have to check out her books to see what kind of talent she has. But I’m guessing it’s a special power of some sort, don’t you think? 🙂 So tell, us readers what’s if you were a Talent, what would your special powers be?

Simply leave a comment below and you’re entered to win an e-copy of ASSASSIN’S TOUCH at the your choice of e-tailer.

We’ll draw the winner on April 12th at 12 noon MDT (2pm EDT) and announce them on the blog. The winner must contact us at info@theaharrison.com by 5pm MDT (7pm EDT) Monday, April 18th to claim their prize.