From Thea: One of my very favorite things about hosting a writers on my blog is the chance to share wonderful people with you like my lovely friend Joelle Charbonneau! Thank you, Joelle, for visiting with us this week.

Thanks so much to the fabulous Thea Harrison for letting me visit today. Thea is one of my absolute favorite people so I am excited to get to play here with her and all of you.

Thea asked me to maybe share what I’m up to in my writing world. Which should be easy. Only, I never really know what to say because at the moment I am juggling two very different genres. This week, END ME A TENOR hit shelves. It is one of my two comedic mystery series. This one features stage performer Paige Marshall who is desperate to land her big break. Until that happens, she’s teaching show choir, juggling two pretty awesome guys and running headfirst into murder cases. Fun times.

However, when June arrives, I will no longer just be a comedic mystery author. That is when my first very dark young adult thriller will be published. THE TESTING is the first of a trilogy featuring Malencia (Cia) Vale whose life’s ambition is to be selected for The Testing – the one chance a young person has to get a college education and become a leader of the country that is rebuilding from the Seven Stages of War. But when Cia is chosen, she learns The Testing is more than she thinks and the price of passing The Testing might be more than she is willing to pay.

The two don’t seem as if they should go together. But somehow I find great joy in writing both. I also get a kick out of hearing that people have a hard time believing the same author is behind both voices because they are very different. In many ways, I am my own version of Jekyll and Hyde! To demonstrate, here are two excerpts. One from END ME A TENOR and the other from THE TESTING. There is also a trailer for THE TESTING on thetestingtrilogy.com in case you want to take a peek. I hope you enjoy 

END ME A TENOR 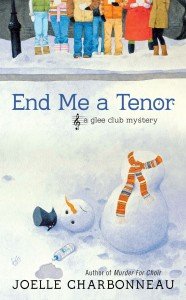 Whoever invented artificial snow deserved to be shot. No matter how careful I was iridescent flakes had landed in my hair, my clothes and my mouth. Not only did they taste bad, but the sparkly flakes made me sneeze. The label said hypoallergenic. The label lied.
Then again, none of my show choir students strategically scattering handfuls of the stuff across the stage seemed to be having a problem. They were delighted to spend their Saturday afternoon flirting, rehearsing and decorating the auditorium for the Winter Wonderland concert. Show choir was their life. I was sorry to say that at this very moment, it was my life, too. But not for long. My performance next weekend was going to be my big break. My real career would take off and I’d be done with teenage angst.
“The stage looks great, don’t you think?” Prospect Glen’s choir director Larry DeWeese walked over to me. His smile was bright, but the way he was wringing his hands spoke volumes.
“What’s wrong?”
“Wrong, Paige?” Larry raked a hand through his disheveled brown hair as his smile widened. Not a good sign. “Why would you think anything is wrong?”
I’d only been working with Larry and the Prospect Glen show choirs for four months, but every time Larry smiled like that bad things happened. I just hoped that whatever the crisis was it wouldn’t involve a dead body.
“Miss Marshall.”
I turned toward the sound of my name, sneezed, then smiled at the student who patiently waited for my attention. Megan Posey was shy, had a fabulous soprano voice and a great work ethic, which made up for her lack of dance training. Some of the other students snickered at Megan’s struggles picking up the choreography, but she ignored them and always came to the next rehearsal prepared. I had to admire that. “What’s up, Megan?”
The blonde senior frowned. “One of the snowmen lost his head. Do you want us to duct tape it back on?”
The mere mention of the word snow was enough to make me sneeze and sneeze and sneeze. Both Megan and Larry took a step back as I sneezed one last time.
“Why don’t I handle the snowman problem?” Larry fished a crumpled tissue out of his pocket and handed it to me. “That way Miss Marshall can start rehearsal. We only have the theater for another two hours.”
Larry headed off to stage left to work his magic on Frosty leaving me in charge. Drat. The students were always better behaved when Larry was around. Having the power to fail them garnered a teenager’s respect. As a voice teacher and extra-curricular activity coach, I didn’t have the power to alter their grade point average which meant I was forced to gain their respect the old fashioned way—through fear. While I didn’t see the lure of show choir, I was grateful these kids lived in terror of losing their place on the squad.
Sneezing one last time, I yelled, “Time for warm-ups.” 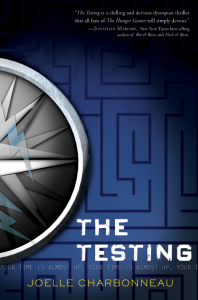 Turning the knob, I push the door open and take a step inside. The smell, urine mixed with corncakes, hits me first. Then I see her. Dangling on a colorful rope. Hanging from the ceiling. Face red and blotchy. Eyes wide with horror. Neck gouged and bleeding where she fought from instinct or because she changed her mind.
I scream as the reality of what I see hits me. Hard.
Ryme is dead.