Fron Thea: Today I’m so happy that friend and author Laurie London has come to visit!  Thank you, Laurie!

Laurie’s giveaway will run until 12 noon, MDT, Friday March 30th.  Details follow at the end of the post:

Some authors start a new book by selecting a theme they want to explore and then work their way into the story. They may decide they want to write about redemption or forgiveness or revenge.

Others start with a more specific premise like a girl who saves the world or a boy who learns to love himself. These are top-down methods where you start big then work your way to the small, like a funnel.

And still others will start with an interesting character (the main character or the villain) and build the story around him or her.

I wish I could say I was organized and could plan out my books that way. It would make my life much easier…I think.

For me, right now, my process is to start small and work big. I begin with the tone and setting (the minutia) then work my way bigger by asking what if and why.

When I wrote the first book in the Sweetblood series, Bonded By Blood, all I knew was that a man was hidden under a pile of leaves in an old abandoned cemetery. I didn’t know the theme. I didn’t know the premise. I didn’t even know if the man was the hero or the villain…or if he was even a man.

But I liked the “feel” and the tone of the setting (quiet, alone, abandoned, eerie, expectant), so I started asking questions (Why is he there? Why is he covered in leaves? Oh, he’s a vampire? Well, why is it daylight?). That’s how I worked my way into the story.

The second book, Embraced By Blood, started much the same way, but with a little more direction regarding who the main characters were, since both were in the first book. Again, I wanted the tone to start off dark, alone, cold, hopeless, angry, raw, and primal, so it begins with the reluctant hero on a rainy college campus late at night and unfolded from there. (Hey, they’re romances, so when you start out like this, the growth to the happy ending is ginormous!)

For the third book, Tempted By Blood, something a little different happened. I still started with the tone and the setting, but this time, it wasn’t at the beginning…and it wasn’t with the hero or heroine.

Shortly before starting the book, I’d read this article in the New York Times (http://www.nytimes.com/2010/11/14/travel/14czech-overnight.html?_r=1&scp=6&sq=Overnighter&st=tcse) about a monastery in the Czech Republic. A medieval monk collected the bones of 40,000 plague victims and created macabre, yet beautiful, pieces of art that are on display today in the Bone House. It stuck with me, even haunting my dreams. (I SO want to visit someday.)

Maybe I’m a wannabe travel writer or something, 🙂 but the tone was perfect and I wanted to write about it. So I decided that Ventra Capelli, the villainess, was intrigued by a place like that too. 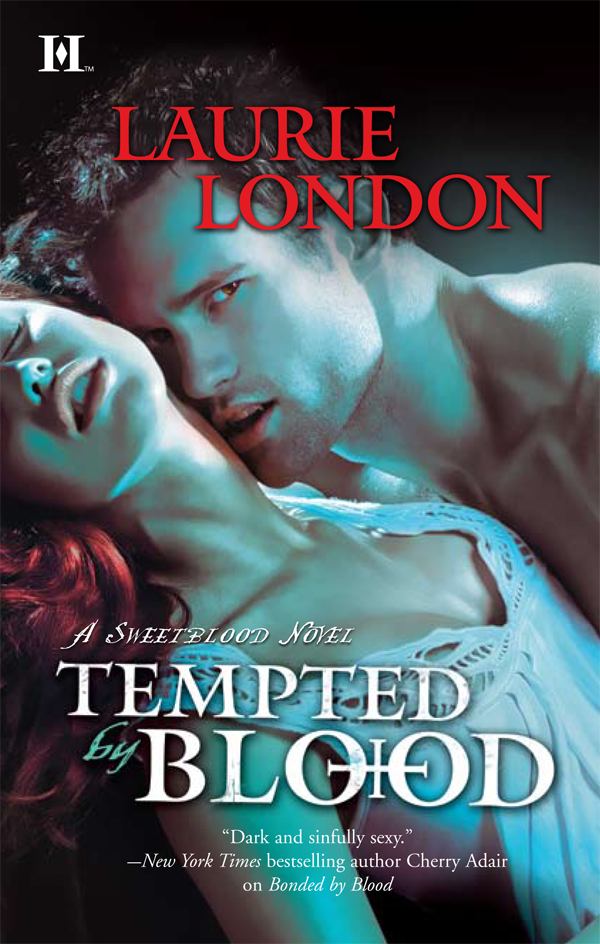 She’d heard stories of how beautiful the Darkblood Alliance headquarters were, but nothing had prepared her for this. Her heels clicked on the marble flooring, the sound echoing off the chamber walls, emphasizing the vastness of the space.

Various suspended sculptures hung from the frescoed ceiling, not unlike the Chihuly glass pieces in the lobby of the Bellagio in Las Vegas, a hotel she was intimately acquainted with. As she looked closer however, she realized these weren’t glass works of art. They were made from various human bones.

From floor to ceiling, the walls were covered in human-skull sconces. The lower jaws had been removed, replaced instead by pairs of femur bones, making the skulls appear to be biting them.

Unlike jack-o’-lanterns where light shone out the mouth, nasal cavity and eye sockets, each one of these skulls glowed, the bone sheer enough to be illuminated by the candle inside. Hanging down from the coved ceiling was a chandelier made from artfully arranged bones and skulls.

The overall effect was a stunning visual representation of the power vampires would always have over humans.

“Lovely, isn’t it?” said a silky male voice behind her.

She spun around to see a thin, middle-aged vampire standing behind a reception desk. She’d been so distracted by the beauty of this place that she hadn’t noticed him. She knew better than that. It wouldn’t happen again.

With his dark hair slicked back, he wore a hand-tailored Italian wool suit and a crisply starched white dress shirt. In an obvious display of individuality, a flamboyantly colored silk tie completed the look.

“Rumor has it that a monk in the Middle Ages collected the skeletons of humans who had died of the Black Plague. Forty thousand people, to be exact. Our people did the same. It’s quite a masterpiece, wouldn’t you agree?”

“Indeed it is,” she said. “The whole room is magnificent.”

She eyed a macabre piece located in one of the corners. Bones had been wired together to create one large, grotesque figure with three heads, its freakishly long arms and legs jutting out from the torso at odd angles.

“It’s interesting, isn’t it, though it’s not human.”

She raised her eyebrows and looked at the piece again. “It isn’t?”

“It’s made from the bones of the Master’s rivals.”

The new leader of the Alliance was obviously ruthless and cutthroat. Important qualities to have.

On a nearby plaque affixed to the wall, she recognized a paraphrased quote from Cervantes, inscribed in an old world script.

The man laughed. “The Master does have a sense of humor.”

Then he continued where he’d left off. “Of course, we’ve added to the collection over the years. In addition to this piece, there are a few others in the Master’s Chambers, which you’ll see next, but these are the oldest and most fragile.”

Swinging his arm wide, he spoke with the passion of a museum curator, not a lowly receptionist, although Ventra understood that sometimes you had to befriend the help in order to get access to those in power.

“Right this way,” he said, indicating a corridor leading to the left just past the sculpture. “The Master is expecting you.”

She cast one last look over her shoulder, cementing every detail into her memory. When she returned home, she vowed to put together a room just like this one.

Or maybe a whole house.

You can learn a lot about a character by how they react to their environment, don’t you think?

If you’d like to see some actual pictures of the monastery, check out my Pinterest board. (http://pinterest.com/laurielondon/writing-inspiration/ ) An interesting side note is that a woman just happened to see one of pictures of the Kutna Hora monastery  I’d pinned to my board and mentioned that she’d been there. I asked if she’d pinned any of her pictures, because I’d love to see them. She hadn’t yet, so she proceeded to post a dozen or so and let me repin them to my board. Check them out. They’re drop-dead amazing!

I’m giving away a signed copy of Tempted By Blood to a random commenter. (Open internationally.)