From Thea:  I’m delighted to have friend and talented thriller writer Dan O’Shea visit for this week’s Writer Wednesday.  Dan and I are “agent siblings,” as we’re both with the Donald Maass Literary Agency, and we both share a love for the classic movie A Lion in Winter.  I switched things up a bit this week by tossing him some interview questions… Thank you, Dan, for coming to visit!

Dan is offering a giveaway this week, and the details follow at the end of his blog post.

1.  We’ve just met at a bar.  I’m drinking scotch and looking expectant.  Tell me about yourself in a few sentences, and why you write fiction.

Where were we? Oh, that’s right. Me. Helluva a topic, me. This scar on my cheek? (I lean forward so you can get a better look and I can smell your perfume and sneak a peek down your blouse.) *This is where I smack you, but not too hard. *  That’s an actual saber scar from an actual saber. Buy me a drink and I might tell you about it. Hell, buy me enough drinks and I might show you the rest of my scars. I’ve got lots of them. I’m not Jewish, but circumcision, that was still all the rage when I was sired. That does leave a scar, you know. . .

Sorry what? Oh, writing. (I look at you appraisingly, like I’m making a decision.) I could feed you the usual nonsense, the tortured artist crap, carry on about this oppressive compulsion, about how I can’t NOT write, about how the words boil inside me from some sacred font and I am their servant, their humble conduit into the world. But you look like a girl who knows bullshit when you hear it.

The truth is I’ve always had a fairly elastic relationship with the truth, and if that strikes you as a tautology, too bad. Even when I was a kid, people would tell a story and I’d be editing. Somebody’d be carrying on in that tedious way that most people have about something that happened to them, something that was supposed to be interesting, and I’d be thinking “you know, this would be a much better story if . . .”

Curiosity, I guess. And a pretty constant stream of perverse impulses. I read a story in the paper about how some kid set a new record by selling 17,000 boxes of Girl Scout cookies, and bad things happen in my head. Just my nature.

That, and chics dig writers.

2.  You’re a professional thief, and you’re proud of your career.  Which of the following time periods would you want to live in to practice your craft and why?  A: a privateer in the Elizabethan Age, B: a highwayman during the Regency Period, C: a stagecoach robber in the American West, or D: a looter in Genghis Khan’s horde.

Hmmmm . . . I do like me some Elizabethan, wrote a whole novel where I turned Shakespeare into a reluctant gumshoe. But England feels a little claustrophobic if you’re leading a life of crime. Too small, too easy to get cornered, Too likely to end up dangling at Tyburn, so that leaves out A and B.

The west? Plenty of room, for sure. But like I said, I’ve got this curiosity problem. With all the movies, TV shows, the west feels a little familiar, like I’d be living in reruns.

But Genghis Khan’s horde? A horseman in the army that conquered a biggish chunk of the known world and turned it into the largest empire the globe has ever seen? Start out as a kid herding goats in Mongolia and end up at the gates of Vienna making a mess of burghers shit themselves? Yeah, plenty of breathing room and it’s not a story I’ve already heard a hundred times. I could do some damage with that crowd. Besides, I’ve always had a little thing for Asian girls.

3.  Tell us a little about your new publication of short fiction, Old School.  What is your favorite thing about it? 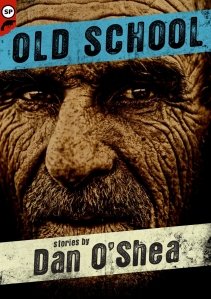 Thea, you’ve got a few zillion books out already, so getting published is probably old hat for you, but just getting published is a pretty big thrill for me, even if it’s just an e-book. Beyond that, I guess if I had to pick one thing I really like about the collection, it’s that I show some range. I mean I’m a crime guy if I have to name a home genre. And Old School does have its share of straight-up crime fiction. But there are a few stories that come a little out of left field. The first two stories, they aren’t really genre stories at all. Then I’ve got a long internal monolog from the Bard, Shakespeare having a dark night of the soul over how he treated a girl. Even got a vampire story that seems to get the ladies a little hot and bothered, but there ain’t nothing sparkly about it. I guess I’m hoping if somebody reads Old School, they’ll feel like I’m a guy they can give a shot, that I’ve got some game and even if something’s a little out of their comfort zone, they might enjoy the ride.

4.  You and your wife have given each other a “free pass” on five celebrities that you can spend the night with, should the opportunity ever arise.  Who are your five celebs?

You say celebs and I guess I think actresses mostly. This whole crop of reality TV freaks we’ve got now? Paris Hilton, these Kardashians? I don’t care what they look like, I find that sort of – I was going to say stupidity, but that’s not accurate. Their fans are stupid, but those “stars” themselves have a uniquely modern and banal cunning that’s allowed them to combine a decent body with an almost sociopathic lack of self respect and turn a complete absence of talent into tremendously lucrative careers. They’ve ridden the sex-tape A-train to the top of the celebrity pile. But, as objectively attractive as they might be, they actually revolt me. If, through some remarkable accident, I found myself in a room with a willing Kim Kardashian, I don’t think I could even get hard, and not just out of fear of disease.

Truth be told, I don’t think there’s a wrong answer.

And, to quote Forest Gump, that’s all I’ve got to say about that. Christ, my daughter’s probably going to read this. She doesn’t need to know whom I’m shtumping in my head.

Although there’s this writer, this Thea Harrison chic . . .  (You rascal!)

5.  Are there other genres that you would like to explore as a writer?  If so, what are they?  Do you have a story sitting in the back of your head, waiting for you to find time to write it?

I’m writing a crime/horror mash up now, which, aside from some flash-length stories, is my first significant departure from the crime genre. I’ve got a rural noir story with a necrophilia angle that’s been rattling around my noggin since a long drunken evening spent with Scott Phillips and company at Bouchercon a couple years back that may or may not ever get written. Fun guy, Scott, but you don’t really want to spend too much time with him.

6.  What would your mascot be if you were a super villain and where would you lair? (Ha! Yes, lair.)

If I were a super villain, I would like to think that I would be so creative and effective in my evil that I would, myself, become the embodiment of villainy and I would not require the avatar of a mascot to strike fear into the hearts of men. My presence alone would make them tremble. Unless, by mascot, you mean, like, a pet or something. Then I suppose I could bring Stacia Decker’s menagerie along for the ride – the Twin Pugs of Horror and the Pit Bull of Death! (Yeah, it’s an in-joke. Sorry. Don’t you hate it when people do that? But I gotta suck up to my agent. It’s not like she’s making any money off me.)

Lair, eh? A lair implies a need to hide. If it’s worth doing, as they say, then do it well. If I turned fully to the dark side, my aim would be to become so feared, so powerful, that I would live in plain, even celebrated view, ensconced in a palace so grand and opulent that, had Coleridge seen it, the world would never have heard of the fabled pleasure dome of Kubla Kahn. I would live in the clear sight of man and in the lapdance of opulent luxury and without fear as none could stand against me. That’s hubris, of course. That ends up going all Pacino, me and my “little friend” making like Custer. But hey, it’s good theater.

Favorite movie – Varies by mood, but The Lion in Winter is always in the top three.

Favorite album – Variable again, but Late for the Sky by Jackson Browne for sure

Favorite dysfunction – Hmmmm . . . Erectile? Male obsession with boner pills has led to some of the most peculiar and delightful advertising.

OK, dear readers, that was fun. But, given that the Divine Ms. T’s readers tend toward the romance end of the spectrum, I suspect I’ve pretty much thinned out the herd at this juncture, sent most of ya’ll who stopped by streaming for the virtual exits, clucking your tongues and wondering about Thea’s sudden lapse in taste and judgment. (On the other hand, there is that whole dragon sex thing, so maybe you lot have a higher kink tolerance than I give you credit for – I mean that’s bordering on bestiality, that dragon love business. “Not at all!” you’re all saying. “The dragon guy is in his HUMAN form during the love scenes!” Yeah, sure, you keep telling yourselves that. And keep thinking that his being hung like a, well, dragon, has nothing to do with your attraction.)  So I dunno, maybe you guys are my kinds of peeps after all.

Anyway, on to the self-pimping portion of today’s program. I got this book out there, OLD SCHOOL? Poor thing needs some eyeballs, and I’m not above paying for them myself.  So I’m giving away five copies to folks who comment on the post. If there are only five comments, then everybody gets one. If there are more than five, then Thea will pick five winners. If there are less than five? Well, that will be pretty humiliating, won’t it? Not even being able to give my book away?  You don’t want to make a grown man cry, do you?  ‘Cause I will. I’ll cry and I’ll post a YouTube video of my bitter tears, the wrenching sight of which will haunt all you non-commenters until the end of your days. I mean c’mon, how hard is it? You click the comment box, you type some crap. You can get back at me – you can post a devastating review on Amazon. So we got a deal, right? RIGHT?

Thanks for reading along. And, Thea, thanks for having me over. Sorry about the mess. But hell, you should have known better.